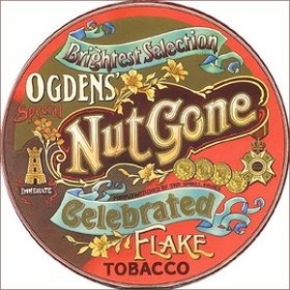 Over the years, Ogdens’ Nut Gone Flake has been reissued on CD seven different times by the same label, so any skepticism regarding whether or not this most recent 3-CD “deluxe edition” by that same label is the ultimate/definitive/perfect/never-to-be-topped version is well-warranted.

END_OF_DOCUMENT_TOKEN_TO_BE_REPLACED

Poetry ‘n Lotion performs Q: Are We Not Men? A: We Are Devo! concert preview

The members of Tampa band Poetry ’n Lotion aren’t shy at all about waving a flag for their teenage influences. Although the quartet’s main gig is dishing up thick, instrumental music that’s as indebted to modern jazz as it is to art-rock and international sounds, PNL has also garnered something of a reputation for its tribute sets where the band plays one of their favorite classic albums front to back. They’ve done Black Sabbath’s Paranoid, the soundtrack to The Rocky Horror Picture Show and they rang in 2012 with a New Year’s New Wave celebration in Tampa that ran through Devo’s Q: Are We Not Men? A: We Are Devo! album. Of course, the notion of hearing the second-best Devo album transmuted into instrumental, jazz-flecked weirdness is just the sort of thing that helps get people in the door, and when the band follows up the closing notes of “Shrivel Up” with a set of PNL originals, you’ll realize the true genius of their approach.

The creative trajectory of the Kills has been an interesting one to follow. Defiant, artful, and very nearly contemptuous in their early years as a duo, the cooler-than-thou vibe that Allison Mosshart and Jamie Hince projected had a massive impact on their early recordings. The duo’s first full-length album sounded like a raw, dirty, and confrontational slash at the modern-garage-band approach, making for an unfussy and explosive sound that bristled with electricity and venom. In the years since, though, the Kills have become more and more interested in expanding their sonic palette; and to the degree that their formative sound was based on simplicity and directness, BLOOD PRESSURES seems to spring from the idea that more is better. Cuts like “Nail In My Coffin” are birthed from the barest elements, but wind up sounding overly-polished and oddly half-baked. While the Kills circa 2001 would beat a simple idea into glorious submission, the Kills in 2011 seem content to take a sliver of an idea and pad it unnecessarily into something resembling a song, resulting in plodding, mid-tempo mush. “Satellite” and “DNA” sound expressly crafted to capitalize on the success the duo has had placing cuts like “Cheap and Cheerful” in video games and television shows; it’s as if the songs are calculated to contain just enough sleaze and sinister swagger to evoke the idea that they’re somehow dangerous. It’s easy enough to blame this misstep on Mosshart’s newfound glory in the Dead Weather – a band that seems to continually benefit from her creativity and attitude – but what seems more apparent is that the Kills have simply run their course creatively. While nothing on BLOOD PRESSURES sinks to the level of being purely awful, none of it rises to the heights one would expect from this once-great band.

The stats helper monkeys at WordPress.com mulled over how this blog did in 2010, and here’s a high level summary of its overall blog health:

The average container ship can carry about 4,500 containers. This blog was viewed about 15,000 times in 2010. If each view were a shipping container, your blog would have filled about 3 fully loaded ships.

The busiest day of the year was July 23rd with 421 views. The most popular post that day was Janelle Monáe: The ArchAndroid CD review feature (Orlando Weekly).

Where did they come from?

These are the posts and pages that got the most views in 2010.

You’ve surely noticed that the beer selection at your local public house has gotten considerably better over the last few years. One of the people you can thank for that is Mike Smith. As the public face of Florida Micro Beverage Distributors, Smith is the guy who’s getting that Hoppin’ Frog IPA, Left Hand Milk Stout and Shipyard BlueFin Stout into bars that a half-decade ago thought they were catering to beer snobs by serving Michelob AmberBock. Firmly in the camp of small-scale craft brewers, Smith is on the good side of the beer wars, putting on events like the Beer Bomb Bike Tour, beer dinners and even beer golf in order to get people to think past the Bud/Miller/Coors conglomerates when it comes to drinking.

Zombies and kickball may not seem like the most obvious way to bring a neighborhood together, but by organizing and promoting events like Zombietoberfest, a Monty Python tribute festival and, yes, a kickball tournament, Kat Quast is at the forefront of defining the vibe of the previously inchoate Audubon Park Garden District. Roughly encompassing the strip of Corrine Drive between Leu Gardens and Baldwin Park – including Stardust Video and Coffee, Park Ave CDs, Big Daddy’s Roadhouse and other shops and restaurants – the district organically became one of the hippest places in town. Thanks to Quast’s efforts, the area is thriving, both as a destination and as a livable and vibrant community.

So, what about that Orlando sports team that plays at Amway Arena and made it all the way to the semifinals and then got beaten at home before making it to the big game? Wait. Did that happen? Yes, it did, to the Orlando Titans, our fair city’s professional indoor lacrosse team. Team captain Casey Powell was awarded the National Lacrosse League’s MVP honor and was also named to the NLL’s All-Pro team along with the team’s goaltender Matt Vinc. All-star and MVP players and a semifinalist team – all in the team’s first season in Orlando.